TRAVERSE CITY, Mich. (AP) — Michigan, Illinois and a federal agency have agreed on funding the next phase of an initiative to keep Asian carp out of the Great Lakes by strengthening defenses on a Chicago-area waterway, officials said Thursday.

The two states and the U.S.

Wilder Harrier, a Canadian pet food company, is using another unlikely alternative protein source to have a low environmental impact, yet a nutritious meal for dogs.

NOTE: The report will formally be presented in English at 2 p.m. ET on Thursday, Dec. 10. A French session will follow at 3:30 p.m. For more details about how you can watch or ask questions, click here.

Public concern about climate change is escalating in the Great Lakes region, according to a new report issued by a binational group that manages and protects the Great Lakes.

Since their introduction years ago, invasive Asian carp have infested rivers and lakes around the United States.

But they’ve been kept out of the Great Lakes — so far.

Some steps have been taken to protect the lakes system, but many believe that more effective policies — and more substantial barriers — are needed to keep the fish from spreading and to reduce the numbers where they’re already established.

LANSING, Mich. (AP) — Michigan lawmakers on Tuesday began approving a budget bill that would authorize the federal government’s supplemental $300-a-week unemployment benefit during the coronavirus pandemic and provide $6 million in state funding for costs related to devastating flooding in the Midland area.

In her first regional appearance after taking office in January 2019, Michigan Gov. Gretchen Whitmer made it clear that Michigan would take a leadership role on Great Lakes issues.

A series of online videos for fisheries managers who need to sample for invasive carp species like bighead and silver carp is now available. This unique resource—a collection of 17 videos that can be watched on YouTube—grew out of a workshop that took place in spring 2019 at Lake Barkley State Resort Park in Kentucky. 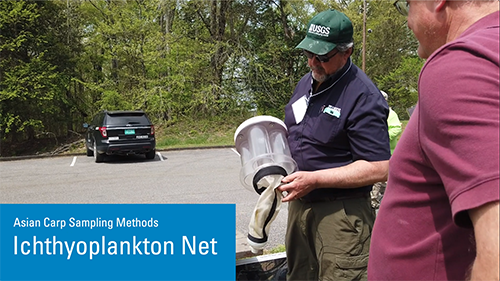 Duane Chapman of the U.S. Geological Survey discusses an ichthyoplankton net and its use for silver, bighead, grass and black carp sampling. (Photo: Bonnie Willison)

The April 17-18, 2019 workshop on invasive carp species featured experts from around the country, who presented to about 65 attendees.

Said Campbell, “This workshop was a one-of-a-kind interagency effort to train people in the methods needed to sample for bighead and silver carp.” Those methods can be different from standard ones familiar to most U.S. fisheries professionals. For example, different gear may be needed, and the video series covers different types of gear and how to use it, among other topics.

“I’m so glad that workshop organizers had the forethought to capture this event so this knowledge could be preserved and shared with more people,” added Campbell.

The effort as a whole is aimed at more effective management of these invasive species in the waters of the Mississippi River basin, a vast watershed covering about 40% of the continental U.S. The methods demonstrated at the workshop can be used for a combination of monitoring (to know where the fish are) and control (to remove the unwanted species). 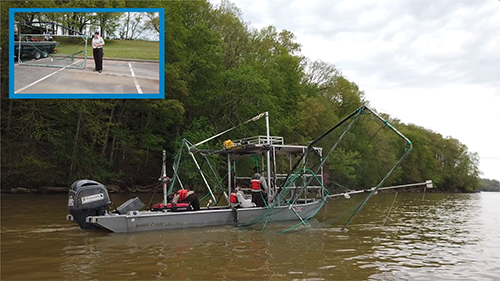 Emily Pherigo of the U.S. Fish and Wildlife Service discusses the paupier boat and gives an overview of the equipment. (Photo: Bonnie Willison)

Bighead and silver carp are problematic because they eat a lot, grow rapidly and become quite large, with silver carp exceeding 60 lbs. and bighead carp exceeding 100 lbs. If left unchecked, they become abundant and make recreational uses of lakes and rivers difficult due to their sheer numbers. They also pose a significant threat to the Great Lakes, where they are not yet established.

With the federal government writing trillion-dollar checks to fight COVID-19, support collapsing businesses and feed cash into the economy via stimulus checks, Great Lakes legislators and advocacy groups are seizing on the opportunity to secure federal funding while the money still flows.

As the author of Great Lakes Now’s Collection of Lesson Plans, educational consultant Gary Abud Jr. is now providing more support for parents, teachers and caregivers who want to incorporate Great Lakes learning into their time with children and students. His series of writings can be found HERE along with the lesson plans and a Virtual Field Trip.

The state Department of Natural Resources said the fish was found March 17 during a routine survey of the Tittabawassee River below the Dow Dam in Midland County. 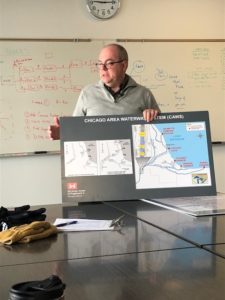 Chuck Shea, with the USACE, explains the 120-year history of the canal and its charge from Congress to stop the spread of AIS through the canal — a charge that came in 1996. Image by Moira Harrington.

Last Friday, I went to the Chicago Sanitary and Ship Canal, which is outfitted with a set of thrumming electrical barriers. These barriers churn out an alternating current 34 times per second, each with a duration of 2.3 milliseconds. The goal is to turn back any invasive Asian carp set on making the journey into the world’s largest freshwater system. If established, it’s theorized the voracious eaters would decimate food sources at the expense of larger native fish.

Willison and Widell are working on a multipart podcast series with a focus on AIS. Willison was tenacious in her efforts to secure permission from the U.S. Army Corps of Engineers (USACE) for our visit to Romeoville, Illinois. These are the folks who manage the site of what’s been called the world’s largest electric barrier, actually three of them with 155-foot sections of electrodes at the bottom of the 27-foot-deep canal.

A fourth barrier is under construction and will have three times the power of the existing ones. The USACE plans to throw the switch on that in early 2021.

This is ground zero in the battle to keep Asian carp from reaching the Great Lakes through a manmade waterway linking Lake Michigan to the Mississippi River Basin. It’s a 120-year-old unnatural connection, enabling marine transport and a cleaner Chicago, since stormwater and treated wastewater now flows out of that city thanks to an engineering feat that reversed the natural course of the water. It’s also provided a highway to mix species between the two aquatic systems that nature never intended to mix.

I’m not someone who geeks out on engineering, shipping or electricity. And it certainly wasn’t the promise of lovely waterside aesthetics that drew me south. This section of the canal is set amid a heavily industrialized stretch with belching petrochemical refineries. 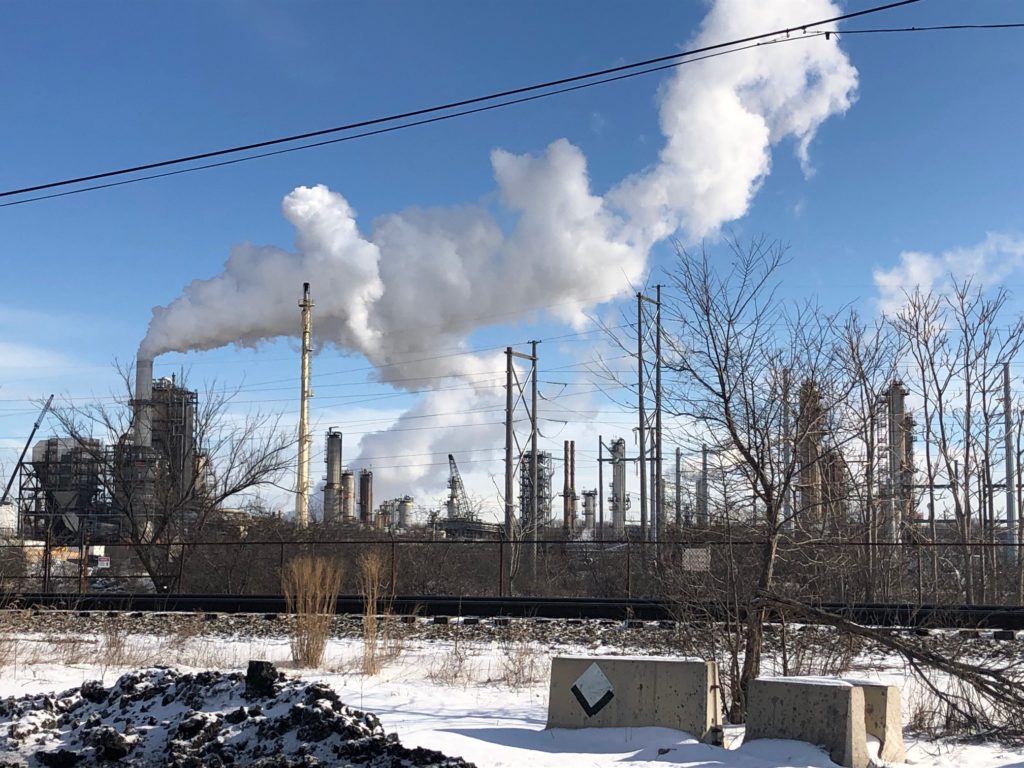 The area around the electrical barriers is heavily industrialized. Image by Moira Harrington.

No, my emotions got revving because of what this place represents. Eight USACE employees, some consultants with barrier manufacturer Smith-Root and a whole lot of electrical buzz are all that stands between the Illinois River’s Starved Rock Pool, which supposedly holds the planet’s largest concentration of Asian carp and is about 60 miles from where I visited, and the rippling waves of Lake Michigan. Wow!

I wasn’t the only one expressing emotions. Widell said she has “peaked” now that she’s had a visit. Our lead AIS Specialist Tim Campbell wasn’t able to make the trip but responded to Seilheimer, aka @DrFish on Twitter, with #jealous.

Hamerla told the story about how Skawinski had texted him earlier in the week: “Call me ASAP.” When the two connected and Skawinski extended the invitation, Hamerla’s response was reportedly an enthusiastic, “Heck, yea,” leading to a 4 a.m. departure from Stevens Point to meet at the appointed hour.

Strong feelings weren’t limited to our group. Chuck Shea, USACE barrier project manager, said what motivates him on a daily basis is, “Knowing that you’re working on something that benefits so many people.”

The podcast episode about Asian carp and the barrier will be released in spring or early summer. At that time and after listening, Willison and Widell are betting you’ll get some emotions going, too.