With art ranging in size from giant mobiles to miniature paintings, artists from across the country are collaborating to face the climate crisis with a new exhibit in metro Detroit.

John Vucetich has studied wolves and moose for over 20 years on the pristine, isolated island in Lake Superior. He leads the island National Park’s wolf-moose project.

The post Ecologist ponders fairness to wildlife and the thoughts of moose first appeared on Great Lakes Echo.

The group presents WAVE Awards, which honor excellence in the video production industry as well as in web, audio, video and graphic design. The 2021 competition received over 90 entries, including materials created for international and national entities like Yamaha, BBC America, Google and PBS Kids.

The Wisconsin Sea Grant video Geo Rutherford: Voices of the Coast was awarded a WAVE merit award in the video editing category. 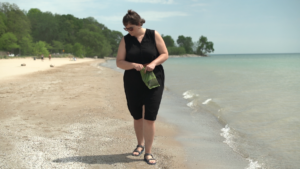 “It was fun to meet Geo, interview her in her home studio, and then go beachcombing with her in Milwaukee,” Willison said. “It was a rewarding challenge to edit hours of footage into a short, 5-minute documentary-style piece.”

The winning video is a light-hearted, buoyant profile that matches the spirit of Wisconsin artist Geo Rutherford, who creates prints, collage and sculpture that explore the hidden elements of the Great Lakes. Showcased in the video are Rutherford’s colorful installations, which highlight small synthetic or natural objects that are washed ashore by the waves. Rutherford also draws attention to microplastics like nurdles, which are a growing marine debris problem in Great Lakes ecosystems. 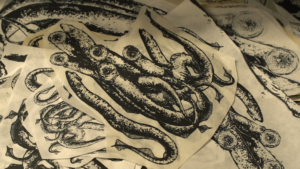 The video is part of the Voices of the Coast series, which tells the stories of individuals who live, work and recreate around the Great Lakes. Their experiences provide a lens for larger topics that touch on the lakes such as social justice, fisheries and conservation. The ever-expanding series can be found here.

Cohen will be at Howe Memorial Library in Breckinridge, Michigan, on Nov. 15 from 6 to 7 p.m. presenting “Making Teas, Tinctures and Oils at Home.”

The book tells the history of the Agatha Biddle Band, a band of primarily Native American women who lived on Michigan’s Mackinac Island in the 1800s.

Artists in the Great Lakes region are taking trash and turning it into art.

“A Backyard Prairie. The Hidden Beauty of Tallgrass and Wildflowers” is available at Amazon and Barnes & Noble for $24.50.

The post New book celebrates ‘hidden beauty’ of native prairie through Illinois couple’s journey to turn back time in their own backyard first appeared on Great Lakes Echo.

Waterfowl hunters began buying them nearly a century ago. Just after that, collectors joined the fun.

Since its inception in 1934 when Franklin D. Roosevelt signed the Migratory Bird Hunting and Conservation Stamp Act into law, the duck stamp (as it’s commonly known) has garnered more than $1 billion for habitat conservation in the national wildlife refuge system.

The collection of nature essays was recently selected by the Library of Michigan as one of the 2021 Michigan Notable Books.

The post A light to guide trees and people: “The Star in the Sycamore” is a broad take on the natural world first appeared on Great Lakes Echo.

More than 70 films are showcased at the virtual festival that ends this Sunday.

"A Fine Canopy" is Alison Swan's new book of poetry.

The post "A Fine Canopy" brings you outdoors while the world is stuck inside first appeared on Great Lakes Echo.

By Eric Freedman Looking for a holiday gift with the spirit of the Great Lakes region? If so, here are books (in alphabetical order by title) that Great Lakes Echo has written about this year, including interviews with their authors. Eating with the Seasons, Great Lakes Region by Dereck Nicholas This cookbook combines recipes, language […]

An array of more than 80 marine-debris-turned-art works will be making another Great Lakes stop, adding a lake sturgeon sculpture when it’s installed at a Wisconsin site next year.

Made entirely of plastic trash, these larger-than-life figures have realistic designs. They come as part of the traveling exhibit, Washed Ashore, which aims to educate people about plastic pollution.

2020-08-20
In: Art, Echo
When L. David Mech arrived at Isle Royale in 1959, he had no idea he would pioneer the nation’s longest-running prey-predator study, one that would become a model for wildlife biologists around the world.

2020-08-06
In: Art, Echo
An art exhibition and panel discussions hosted by the Detroit Center for Design + Technology that addresses climate change is available to explore online through August 15.

2020-07-29
In: Art, Echo
A new cookbook serves up the culture along with the food of the indigenous people of the Great Lakes region.

2020-07-09
In: Art, Books, Echo
From crime boss and occasional visitor “Scarface” Al Capone to the Upper Peninsula’s own Public Enemy #1, John “Red” Hamilton, Up North has historic ties to organized crime and the baddies who used the area as a playground.

2020-06-03
In: Art, Echo
The new book from Theodore Karamanski explains how industries and communities dependent on the Great Lakes have created tools and markers to safely navigate them.

2020-04-16
In: Art, Echo
Northern Michigan may be known for beautiful water views and serenity, but more recently it’s become known for a variety of excellent restaurants.